An asteroid can hit the Earth in year September 2135 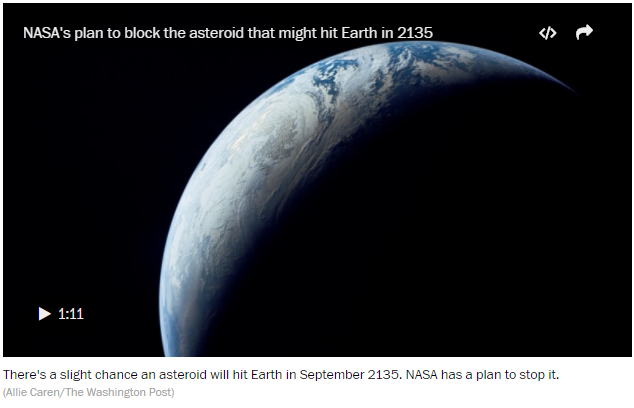 As per NASA an American Space Agency has discovered that an asteroid can hit the Earth in September of year 2135.

The name given to asteroid is ‘Bennu’ and its size is equivalent to the size of Empire State Building of USA.

The scientists are planning to use nine-ton “bulk impactor” to push it out of Earth’s orbit or they can use nuclear device to change its apocalyptic path.

There are more of these things than many people think, Brent W. Barbee, the NASA aerospace engineer said. Researchers detect about 1,000 new objects each year; 10,000 extraterrestrial objects beelining for Earth could still be unaccounted for.

In 1908, what many believe to be an asteroid crashed into an area near the Podkamennaya Tunguska River in Siberia, according to the BBC. It struck with a force 185 times as powerful as the Hiroshima atomic bomb, flattened 80 million trees and reduced hundreds of reindeer to charred carcasses.

An asteroid can hit the Earth in year September 2135 asteroid will hit earth in year 2135 earth mat get hit by asteroid nevino expert software team
Share:

How to Complete Task in KLIK KLIK Application?

What is KLIK KLIK Application?

How to get income in our bank account in KLIK KLIK Application?